Intended level and assumed knowledge: We figure you know a little about probability, a little about R, a little about hypothesis testing and statistics. We’d like to show you how these fit together. If you’re unfamiliar with these concepts, the footnotes will be your guide (some of the time).

And so it begins..

Our location: an office somewhere in Sydney, Australia. It might be well-appointed corporate digs, a slightly underfunded academic building or a cheap cafe somewhere in central Sydney. Choose your own statistical adventure.1

John: Where do you want to start Steph?

Steph: I don’t know, John. I have a lot of pent up rage. Let’s break something.

John: Figuratively. We could look at hypothesis testing. We planned to do something useful, remember?

Steph: OK, let’s break a hypothesis test. But these concepts are all really complex. Explain it like … I’m a management consultant. There should be a powerpoint and a snappy title.

John: No chance. I’ll explain it like I’m a professor of statistics.

Steph: My way is funnier. You and Microsoft SmartArt. Just give me five minutes to put a bet down with your grad students.

John: My way at least makes sense and has an actual point.

John: There were a number of other papers too, like Pashler and Wagenmakers (2012). The common theme between all of these papers, statistically speaking, is hypothesis testing.

One approach to fixing this problem is to pre-register hypothesis testing procedures.

Steph: This plan was not dreamed up by management consultants. Why did they take that approach?

John: Well people tended to play around with their analysis by playing games with statistics to get statistical significance (usually \(p\)-values below 0.05). Pre-registration is the idea that forces researchers to pre-specify how they will analyse their data before they collect it to stop this from happening.

Steph: And yet we do it all the time with exploratory analysis.

Steph: I agree, but as the person who wanted to stab a theoretical concept earlier in this conversation, I can think of a whole bunch of ways this can go wrong.

John: Exactly. It’s really imperfect, but I think it would help to explain why that’s the case.

Steph: You know what this dialogue needs, John?

John: You’re going to tell me, whether I want to hear it or not.

John (thinks): OK so a few years ago my wife was rear-ended while driving and the car was written off so we needed to buy a new car. While we were looking to get a new car my sister in law asked (as a joke) “Are you getting a red car? I heard they’re fast!” 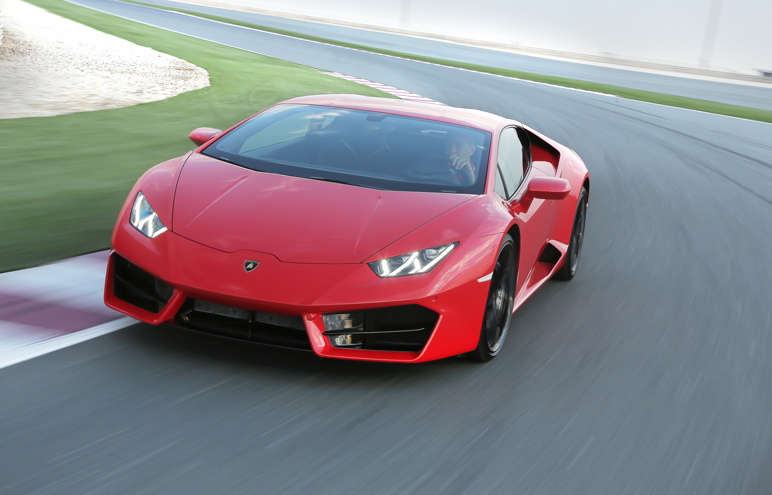 John: Now I don’t know much about cars at all. So if I went into a car yard I wouldn’t want to buy one that looked like this.

John: Fast cars are also expensive cars! But that’s not the point.

Steph: Your midlife crisis is not the point?

John: I’m not having a midlife crisis.

Steph: You’re an academic statistician who just started a blog with a management consultant.

John: My judgement is lacking sometimes. There’s a point to this post though- I wanted to look at a bunch of ways to mess around with hypothesis tests in order to get them to break.

My first example related to my sister in law’s joke.

By break I mean that the results of the hypothesis test are misleading - I want to create a situation where the test is telling us there is a difference between two things when in fact no difference exists in reality.

Steph: Bayesians. Let’s do this, let’s break some hypothesis tests. I might be the frequentist in this conversation, but the fact is that inference is really, really breakable in the field, so I think this is inherently useful. Bring on the cars!

Let’s imagine a simplified world, such as is suitable for management consultants and students of statistics:

The relationship between the three variables can be visualized by a directed acyclic graph.6

There are three nodes: type, colour and speed. The car type “causes” the car colour and the car speed so there is a directed edge from type to colour and type to speed. We can visualize this using the dagitty and ggdag packages (Textor and van der Zander 2016,@R-ggdag). 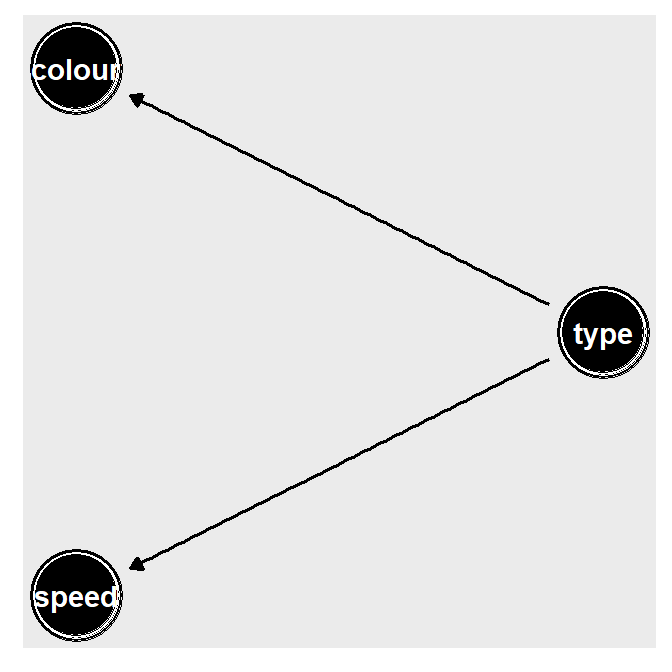 Steph: That was all a bit mathy, but the general upshot is that we created a little facsimile of the world, one in which there are two types of cars (sports and normal), two colours of cars (blue and red) and cars have a speed that depends on their type. Then we represented it with some circles and lines that describe what those relationships are.

Let’s put some numbers around this to create a concrete example: something measurable that we can test, and then show how and where a hypothesis test can (and does) get it wrong.

Let’s say that each type of car is equally likely:

Next, let’s say that the probability of a sports car being red is higher than for a normal car.7

Now, say there are lots of cars in the world. Statistics is usually about understanding patterns in repeated things. Then we can simulate the speed of the \(i\)th car, where \(i\) is just any arbitrary car, as:

Steph: John, you know that some people exist who are allergic to maths, right? So to translate, you made up a situation where the speed of the car is only is related to the colour of the car because red cars are more likely to be sports cars.

John: Exactly, and this is going to be relevant later.

John: We’re going to break this hypothesis test by dropping an important variable.

Now that we have simulated some data we can create boxplots to get a view of the differences between the cars. Then we can try some statistical tests. If we make a boxplot for speed against colour we get: 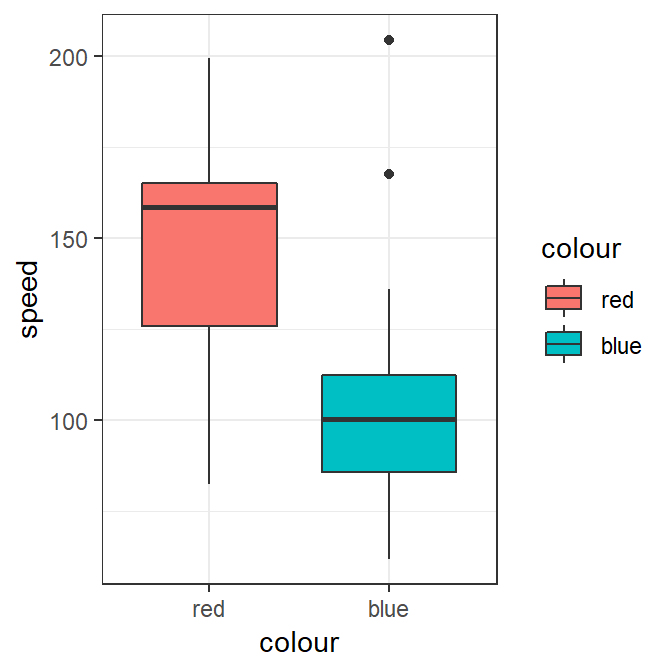 We can see that there appears to be a clear difference between the speeds of red and blue cars from the boxplots.

Steph: If we saw this result in exploratory analysis in the field, this would be our signal to keep digging. And that’s where domain knowledge wins every time, John. At this point in a real piece of field work, as a corporate data scientist, I want my analysts to be jumping up and down at me telling me this isn’t a real causal effect.

John: That’s true, this is a simulated, simplified reality. Out of interest, do they often jump up and down when you’re around?

To quantify the difference a two sample \(t\)-test could be used.

We have two sets of points - one for red cars, one for blue cars:

If we wanted to see if red cars were significantly faster than blue cars we could perform a \(t\) test using the tadaatoolbox package (Burk and Anton 2018).14

And voila, we have a p-value < 0.05. We reject the null hypothesis in favour of an alternative where red cars are faster.

We got statistical significance, which we’d expect because we set up our little universe that way. Fantastic, it worked like we thought it might! (Just not Steph’s development environment).

Steph: But the problem is we know that the colour of the car does not make for a fast car. The hypothesis test is performed correctly, under perfect conditions - but our understanding of causality is totally flawed and as a consequence it’s entirely misleading.

John: Exactly. But statistics is about making inferences into a broader population. We had one caryard in our little facsimile of reality. We really need to understand if this could happen more than once - if it’s a generalisable result. Otherwise it’s just an interesting anomaly.

Steph: Always with the generalising. But I agree. Interesting anomalies are rarely any use to me in the field or in the corporate world. I would need to understand whether this test is fundamentally broken, for all the cars. Or if it’s a fluke.

Suppose that we went to a number of “car yards” (i.e., repeated the experiment) where data was generated using the above process and we only observed:

Suppose that we repeated the experiment 1000 times, that is we went to 1000 car yards15 and performed the same two sample t-test on different collected samples at each car yard collecting data for \(n=50\) different cars each time.16

How often would red cars be significantly faster than blue car if we were to repeat the same experiment over and over again, i.e., would our results be reproducible?

From the above simulations we find that in 94.1 percent of simulations where red cars were statistically significantly faster than blue cars even though the colour of the car has nothing to do with the speed of the car. This is a generalisable result, not a fluke.

Steph: Congratulations John, statistics has discovered the age-old econometric problem of the spurious regression. We broke that hypothesis because we were measuring the wrong relationships.18

John: Yes, that was my point - with a relateable example. It occurs all the time in science. Researchers don’t know what the true relationship between measurements are so they

Steph: This happens in business all.the.time. You think you’re measuring Thing A, when actually Thing B is what’s doing the heavy lifting and Thing B just happens to be correlated with Thing A. Tylyer Vigen’s site is full of examples of this in real life, in those cases, time itself is the common Thing B. If you’re working with time series it’s often inevitable if you don’t recognise the impact it has.

John: Stories for another day?

Steph: Sure- next time let’s see what this idea of a spurious relationship would look like in a real-world data science context.

Acknowledgements: We would like to thank Sarah Romanes, Isabella Ghement, and Shila Ghazanfar for proof-reading and comments.